The brouhaha about the ownership of social data 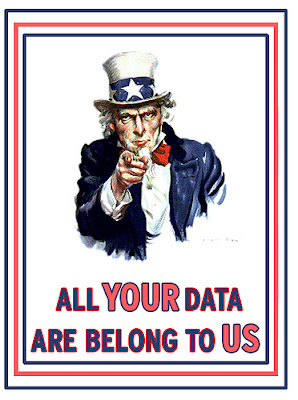 Nearly a month after the Robert Scoble Facebook fiasco, the Blogosphere is still awash with people arguing over who owns the personal data exchanged over the web.

I've been thinking about this, and have reached the conclusion that it isn't a question of ownership. This is a red herring. It's like arguing over the ownership of knowledge acquired from a book. Or a piece of mail while in transit. We'll never reach consensus and will get no closer to solving the problem.

I think, instead, we should be focusing on permission and trust.

When I add someone as a friend on Facebook, I give Facebook permission to share my details with them. I also give that person permission to use that data however they wish. And I trust them not to use the data for nefarious ends. Same as in real life, except there is an initial broker.

It gets more interesting when permission is more implicit than explicit. But I still think we should be guided by the same principles, by aiming to establish what permission was granted and therefore how the recipient is trusted to behave.

When I buy something on Amazon, I would argue that, implicitly, I give them permission to use that data. Not just for their own accounting and stock management needs, but if they want to profile me and target me with offers they think I'd like, then fine. I know they're in it for the money. In fact I think they do a great job of this, given the discreet nature of their recommendations, and trust is established as a result. And of course, they'll lose at least one customer if they sell this data onto a third party without checking with me first.

But should I be allowed to use that data as well? This is where the question of ownership often pops up, and I think we're asking the wrong question. If Amazon wishes to maintain the trusting relationship, they should be willing to give this information up, for sake of maintaining the relationship. If they need to charge a modest sum for it, that seems fair (because it takes time and effort to produce it).

Coming back to the Robert Scoble incident, I gave permission to him to use my contact data however he wanted. Facebook acted as the broker, but after the initial connection was made, they have no place in preventing Scoble from using that data. Terms of Use be damned. If he abused the trust I place in him (he didn't), then that's a matter between me and him.

I suppose I've opened myself up to accusations of naivety. Yes, we are all guided by a legal construct that is based on ownership. But let's not forget that this construct originated in a need for humanity to behave in a civilised manner, and emerging social technologies ought to take heed rather than buck the trend.
Email Post
Labels: Data Data portability Facebook osmosoft ownership Phil Whitehouse philwhitehouse Portability Scoble social data Social Networking