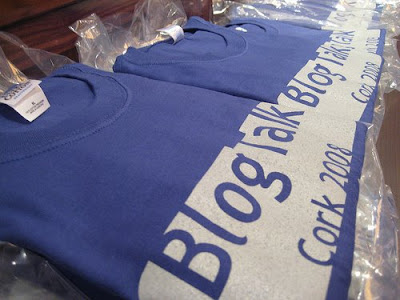 We attended BlogTalk in Cork earlier this week, and it wasn't half bad. We were running a stall again, handing out copies of RippleRap, and were pleased this time to get a chance to demo it on stage (along with TiddlyWiki). This time the demo Gods were kind and benevolent, and the demo worked throughout, including the one which showcased the BT SDK!

The sessions were a mixed bunch. Some (such as Nova Spivack's semantic web talk) were brilliant, and others (such as Mark Bernstein's talk on "Neovictorian, nobitic, and narrative: ancient anticipations and the meaning of weblogs") were largely impenetrable. The event was well organised though.

The best thing was the quality of people in attendance. We had a steady stream of interesting people visiting the stall, such as this guy running OS X on his Thinkpad and writing his thesis in TiddlyWiki. Another, Salim Ismail (entrepreneur and former CEO of the Yahoo! Brickhouse), is keen to use RippleRap with one of his products. It occurred to me afterwards that, having got all these people in one place, it would've been great if we'd torn up the agenda at the start and gone with a barcamp / unconference style event.

Photos are up on Flickr! And of course you can still download the session notes, flickr photos, tweets and blog posts about the event by downloading the BlogTalk edition of RippleRap...