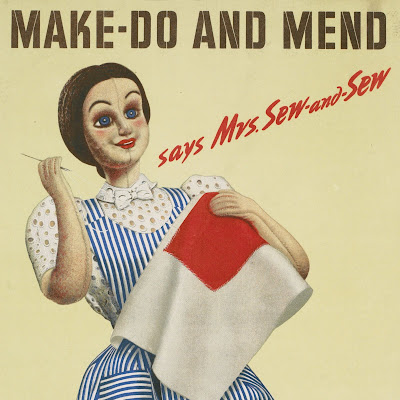 I've been a project manager for a loooooong time now, almost 13 years if you include my marine insurance days. And while it's been a lot of fun - no, really! - I've often wondered what it might be like to be a creative on a web project.

Well, now I know! We were recently approached by a client - the Imperial War Museum - to apply some social media foo to encourage families to visit the museum over the Easter Holidays. They're currently running an exhibition on Children in Wartime, so we thought it might be fun to have someone tweeting and blogging from that era, to tie into the real life exhibition.

They've got an astonishing range of material in their archive, including some from a campaign from during WWII called 'Make Do And Mend'. So we've managed to get our hands on loads of videos, posters, knitting patterns, photos and some pretty amazing books. The campaign will roll out over the next four weeks, up to the end of the holidays. Should be fun!

Here are some links to her Twitter page, her Blog and the museum's Youtube channel (srsly there are some fab videos on there, well worth checking out).

As for who's actually doing the writing...well, we've got to retain some sense of mystery, haven't we? ;-)
Email Post
Labels: Imperial War Museum IWM Mrs SewAndSew Wartime WWII